To continue from my first NYC Vacation Report left off … I’ll be telling you about 3 more plays that we saw. For those of you who didn’t read my previous post here’s a quick summary of our vacation. My husband and I spent 3-1/2 weeks in New York City from mid-May to mid-June this year. We hadn’t planned on spending the whole time in the city itself but that’s how it ended up. No worries though because there was plenty to keep us busy and actually there were some things on our list that we didn’t get to. I don’t think it’s any better if you live there, in fact it might be worse. I know that living in the San Francisco Bay Area there are always way more things that we miss than what we see and we see much more than the normal resident. Check out Installment #1 where I discuss Pacific Overtures; Oslo; and The Little Foxes.

This very enjoyable musical is based on the popular 1993 Harold Ramis  & Danny Rubin movie Groundhog Day which starred Bill Murray & Andie MacDowell. Wikipedia has a good summary of the movie (and the musical as well): Murray plays Phil Connors, an arrogant Pittsburgh TV weatherman who, during an assignment covering the annual Groundhog Day event in Punxsutawney, Pennsylvania, finds himself caught in a time loop, repeating the same day again and again. After indulging in hedonism and committing suicide numerous times, he begins to re-examine his life and priorities. If you want to read more about it go to this link for Groundhog Day. And if you haven’t seen the movie you can easily get it at Netflix, Amazon, etc. It’s definitely worth the watching. Anyway, back to the musical — The musical’s plot runs pretty close to the movie with some minor changes due to it being on a stage and needing to make fast changes back and forth as they run through each scenario/repeat of Groundhog Day. The music and lyrics by Tim Minchin, choreography by Peter Darling, and set design by Rob Howell are fun with a feel-good ending (Phil gets the girl) that makes the point that it’s better to be a loving, giving, supportive human being than an arrogant a-hole. Andy Karl plays Phil in the musical and does a great job of it. On the preview night for critics he tore his anterior cruciate ligament (finishing the performance with a cane) and he was still wearing a knee brace the night we saw the play. Even with the brace he was running around as if there had never been a problem. I’m so glad that we decided to see it and we got a present from our son’s partner (they live in NYC and joined us at the show) => a groundhog plush toy. Check out his picture here, we’ve named him Murray==> 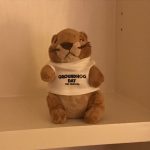 There is a video about the musical below:

Natasha, Pierre and the Great Comet of 1812

Natasha, Pierre and the Great Comet of 1812 is based on a part of War and Peace by Leo Tolstoy. I don’t think anyone could have possibly believed that a fun, successful musical could be made from this book – but Dave Malloy (writer/lyrics/music) and Rachel Chavkin (director) have not only done it but have done is absolutely spectacularly!! I have seen many, many, many musicals and I have to say that this ranks up there among the best I’ve seen. The whole play is sung and everyone in the cast sings, dances, and most also play an instrument (plus a small orchestra). They have transformed the stage itself into a nightclub type setting with runways (that they literally run up and down) from the orchestra level up to the mezzanine. There are tables, chairs, and banquettes for seating on the transformed stage and the performers run in and around the audience members and occasionally sit and talk with them as well. My husband and I were sitting on the end of one of the front banquettes (we lucked out and the seats were available at a discounted price when we decided on a whim to check out the following day’s availability) – I was actually on the end and quite a few of the performers brushed me as they ran in, out, and around the stage. Josh Groban is the “star” of the show and he was standing not more than a foot away from us for one of his songs. Amazingly, the story didn’t get lost in this production – you understood what was going on and you could feel the emotional ups and down of the story and the characters. We are pretty seasoned theatergoers and it takes a lot for us to get this excited about a show. I believe that it is partly due to where we were sitting but the energy of the cast and orchestra is enough to make this a memorable show no matter where you are sitting. You can see a bit of the seating/stage as well as the production in the video here:

Indecent won the Best Director Award at this year’s Tony Awards, it had won many other awards along its way to “Broadway”. The play is a very powerful story about a Yiddish play written in 1906 Warsaw called God of Vengeance. Indecent follows this play and those involved with and in it through Europe and Russia, New York, some back to Europe and ultimately to the gas chambers, and the ones who stayed in the US and were caught up in the McCarthy/Red Scare/Blacklisting of the 50’s. All of this in 1 hour and 45 minutes (no intermission). It’s quite an emotional ride as well as being a cautionary tale for our current times. Here is the description of the play from the website:

INDECENT is the new play from Pulitzer Prize winner Paula Vogel inspired by the true story of the controversial 1923 Broadway debut of Sholem Asch’s God of Vengeance. The New York Times called it “superbly realized and remarkably powerful” and critics have hailed it as one of the best plays of the year. Created by Vogel and director Rebecca Taichman and set at a time when waves of immigrants were changing the face of America, this play with music is a riveting look at an explosive moment in theatrical history and comes to Broadway from its critically acclaimed, sold-out run at the Vineyard Theatre.

I have to tell you that I was in tears at many points of the play and even though I knew what it was about it was that emotionally powerful that I get affected just writing about it. There has been so much additional interest in the play due to the Tony Awards that it did not close in mid-June and is still running with a new close date of August 6. I’m very excited that even more people will get to see and hear this wonderful play. Again – check out the video below for a taste of the music and the play:

The Installment #3 will cover the last 4 plays we saw – 1984; A Doll’s House, Part 2; Present Laughter; and Sweat.   After I finish the plays I’ll be moving on to the art museums / exhibits that we visited and then talk about the restaurants where we ate!! This will go on for many more weeks – you really don’t want to miss any of it! Also – let me know if you saw any of the plays and what you thought about it in the comments below and don’t forget to subscribe to my blog (and get the free memochimp sticky software to use on your blog or website)!!
Share on Facebook Tweet (Share on Twitter) Share on Linkedin Share on Google+ Pin it (Share on Pinterest)

Leave a Reply - Let Me Know What You Think! Cancel reply